International Association for Geoethics
Inicio Declaration IAGETH, one of the signatories of the Declaration on Future Earth &... 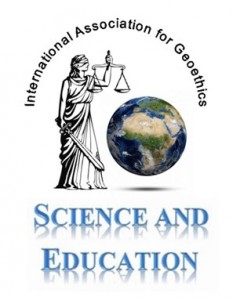 As previously informed, Geoethics (and IAGETH) were present, in connection with geoeducation, in the prestigious ICTP (Trieste, Italy)

The Director of the Conference was Prof. Dr.  A. Ismail-Zadeh ,Karlsruhe Institute of Technology, Karlsruhe, Germany and the CTP Local Organizer was Dr. Abdelkrim Aoudia

The following declaration aims to highlight the importance of Earth and space science education in future scientific progress and to reinforce the link between the scientific community, national governments and the public to contribute to sustainable development of society through scientific awareness and actions related to challenging problems of society. The declaration was adopted on 6 December 2015 by the participants of the International Conference “Future Earth and Space Science and Education” co-sponsored by the Abdus Salam International Centre for Theoretical Physics (ICTP) and the International Union of Geodesy and Geophysics (IUGG) and held in ICTP, Trieste, Italy on 2-6 November 2015.

The responsibility of Earth and space scientists is to help humanity. Seismologists and volcanologists attempt to save lives by evacuating before eruptions or by mitigating the effects of earthquakes. Geodesists quantify the shape of the Earth so that cities can be built and airplanes flown. Geologists help to restore the complicated history of our planet, and space physicists provide a window into the nearly unknown world, in which our satellites are sent and spacecraft launched. Hydrologists, oceanographers and atmospheric scientists may have the heaviest burden of all as they help guide the planet through climate change and natural hazards. In order to push knowledge forward, intellectual and financial resources should be invested in basic science and science education at a level commensurate with the applied fields. At the same time the need for a scientifically literate populace is increasingly recognized as critical in many countries, as they face the consequences of increasing population pressures, limited resources and environmental degradation (c.f., ICSU ad-hoc panel report on science education). Basic science literacy, coupled with scientific “ways of knowing” – namely drawing conclusions based on observation, experiment and analysis – provides citizens with the tools needed for rational debate and sound decision-making based on scientific knowledge. There is a consensus that in many places around the world, science education is facing serious challenges. Those seeking to improve science education face numerous, and sometimes coupled, problems. In many places, the lack of resources – both educational and financial – is linked with a dearth of adequately trained teachers and the growing popularity of non-scientifically-based belief systems. It is clear that developing countries face greater challenges in science education than economically developed countries due to lack of teaching materials including books, computing and communications technologies, community-based science centers, laboratory facilities and equipment, as well as a shortage of skilled teachers. Given this global scenario, and the needs of society, there is an urgent need to improve the preparation of the scientists of tomorrow, not only through widespread access to quality instruction, facilities and research opportunities for all students, but also to improve the motivation and interest of students so that the best of them move toward scientific careers.

Considering the challenging problems of society (e.g. climate change, natural hazards and disaster risk, depletion of mineral and water resources) requires a transdisciplinary research approach and co-productive work of scientists with policymakers and end-users; and the responsibilities of scientists to help society to tackle challenging problems;
Realizing, that science education at all levels needs long-term planning, coordination and implementation;

Call for a strengthening of basic scientific research and science education especially in the developing world; namely,